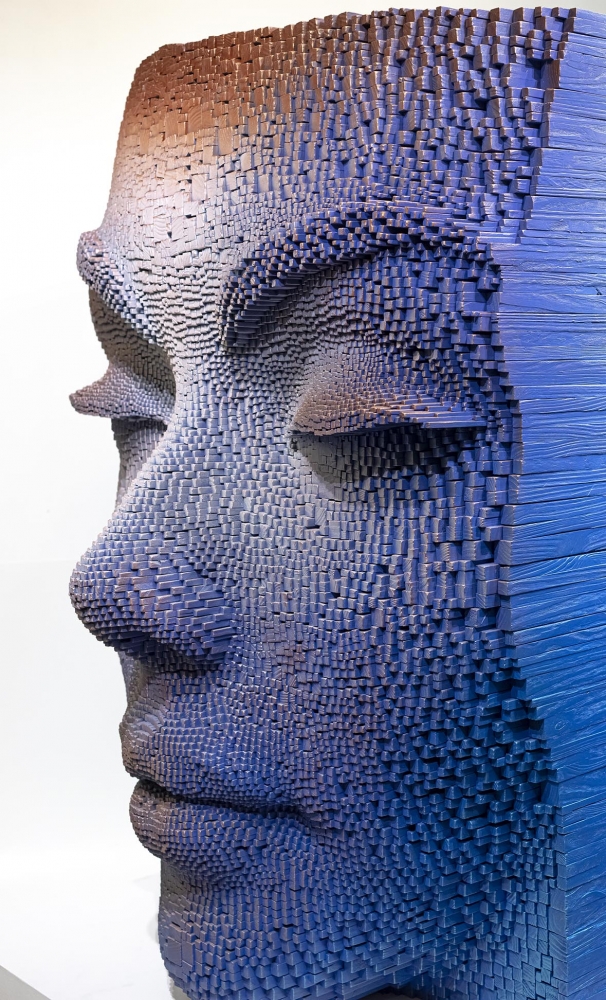 Gil Bruvel (previously) has spent 40 years practicing vipassanā meditation, an introspective practice that invites judgment-free observation of the mind. The Australia-born artist infuses the philosophies of this decades-long ritual into his variegated sculptures as he forms a series of faces in deep thought. With eyes and mouths closed, the figures project serenity and calmness, serving as “a reminder of what it looks like to be centered and at peace,” Bruvel says of The Mask Series.

Different in shape and size, the sticks are burned, painted with subtle gradients, and then held in place with wood glue, causing the figures to appear pixelated and as a disparate grouping of squares and rectangles when viewed up close. From a distance, however, “that fragmentation reveals a coherent whole: a face arises from apparent chaos,” Bruvel shares with Colossal. Through their collated forms, the assemblages offer a visual metaphor for the complexity and contradiction that’s inherent to human beings.

Bruvel also draws attention to the backs of the sculptures, which stray from the figurative depictions of the front to focus on the abstract workings of the mind.  “The assemblage of pixel-like stick-ends conveys the hidden realm of emotion, sensation, and thought—our internal universe. The gradients of color represent the flows of feeling and consciousness that pass through our minds like ripples on a lake, leaving the lake unchanged,” he says.